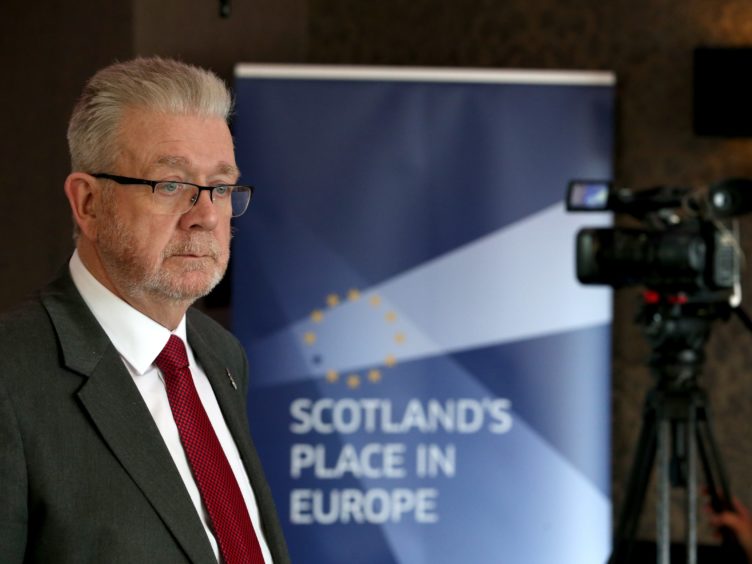 The UK Government is pursuing a “dangerous, damaging and isolationist” path on Brexit, according to Scotland’s Constitutional Relations Secretary.

Mike Russell said the Scottish Government is stepping up its “defence” against Westminster’s plans as it exits the EU.

Boris Johnson’s administration is set to deliver a “hard, uncompromising, extreme Brexit, which rejects co-operation and collaboration and instead seeks to retreat into some mythical empire”, he said.

Against that backdrop, Mr Russell said the Scottish Government would seek to “maintain dynamic alignment” with Europe on areas such as environmental regulations and employment standards.

A new Continuity Bill will be introduced to Holyrood “soon”, the minister confirmed, after a legal challenge by the UK Government ended a previous attempt at legislation.

Mr Russell made clear to UK ministers that when it comes to devolved areas, it is Scotland and not Westminster that should decide if policy continues to mirror that of the EU or not.

The Scottish Government’s position of continued alignment with Europe is being adopted “with a view to reaccession”,  he told MSPs on the Scottish Parliament’s Europe Committee.

Mr Russell said: “One of our main tools will be the new Continuity Bill, which will be introduced to the Parliament soon.

“We will assert our right to operate in the areas of competence in the closest and most dynamic alignment with the EU that we can secure.

“We will defend that right vigorously if it is challenged by the UK Government.”

He added: “It is our firm view that the extent to which devolved law aligns itself with the law of the EU should be a decision for this Parliament to take and no-one else.”

The Constitutional Relations Secretary used his committee appearance to attack the UK Government’s Brexit stance, saying the decision to end freedom of movement, coupled with the “stringent and ridiculous UK Government new immigration plans”, would reduce the working population north of the border.

This could have particular impact on the NHS and social care sectors, he warned.

While Tory ministers have suggested a Canada-style trade deal with the EU as a way forward for the UK, Mr Russell said this would lead to a £9 billion fall in Scotland’s national economic output.

But worse would be a “Australian-style relationship”, he said, claiming this was a Tory “code for no deal, because there is no EU deal with Australia”.

He added: “An Australian-style deal, or more accurately a no-deal, will lead to a fall of £12.7 billion. Trade, inward investment and productivity will be hit.

“In 2018, overseas exports of food from Scotland were valued at around £1.6 billion, of which £1.1 billion – about two-thirds – went to countries within the European Union. That will be hit.”

Mr Russell told the committee: “This obvious hardest of hard-line positions is what the UK Government has now drawn in the European sand.

“So the Scottish Government must in these circumstances reassess its own position.

“We will of course do all we can to limit the damage, we will continue to try to talk some sense into the UK Government. But we will also have to prioritise now not persuasion but defence.

“We will have to work even harder on securing Scotland’s rights, mitigating the negative impacts of Brexit while seeking every opportunity to give Scotland the right to choose a different and more sensible path.”

Mr Russell added: “We will of course continue trying to protect Scotland’s interests because that is our job but unless something fundamental changes, the UK now intends to do the hardest of Brexits to us, rather than negotiating the type of Brexit we want with us.

“So we will have to stand up for ourselves to stop that happening.”

A UK Government spokeswoman said: “We left the EU on January 31 with a deal.

“Moving forwards, we want a relationship with the EU which is based on friendly co-operation between sovereign equals and centred on free trade, similar to the agreement the EU has with Canada.

“Alongside this, we will negotiate new trade agreements with partners around the world.”