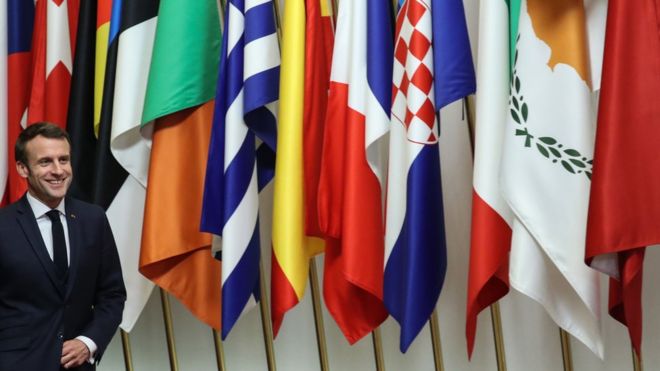 French President Emmanuel Macron has said he is “not sure” a UK-EU trade deal will be struck by 31 December, the end of the Brexit transition period.

Mr Macron said negotiations starting in March will be “tense”, with fishing rights a key point of contention.

It comes as the UK government signalled it would publish its mandate for the trade deal later this week.

In the document, ministers are expected to reiterate their desire for a Canada-style deal with few tariffs on goods.

While a trade deal is hammered out with the EU, the UK is following the majority of the bloc’s rules.

The UK is in this transition period until 31 December following its departure from the EU on 31 January.

“I am not sure that an agreement will be reached between now and the end of the year,” Mr Macron said at a meeting with fishermen in Paris on Saturday.

“Anyway, it is going to become more tense because [the British] are very hard.”

Mr Macron also said fishing rights could be a sticking point in negotiations.

The UK has said it will consider a deal on fisheries but it must be based on the notion that “British fishing grounds are first and foremost for British boats”.

The EU has different ideas about an agreement on fisheries.

Mr Macron’s comments come as the UK government signalled it would publish detailed demands for a trade deal.

The mandate is due to be signed off on Tuesday and will be published online and in Parliament on Thursday, the BBC’s Jonathan Blake said.

Prime Minister Boris Johnson’s chief Brexit negotiator, David Frost, called for a “Canada-Free Trade Agreement-type relationship” with the EU in a speech in Brussels earlier this month – and the mandate will repeat these demands.

But EU chief negotiator Michel Barnier has said such a deal cannot happen.

Mr Barnier said the EU was ready to offer an “ambitious partnership” with the UK post-Brexit, but its “particular proximity” meant it would be different.

Under Canada’s agreement with the EU, which took seven years to negotiate, import tariffs on most goods have been eliminated between the two countries, though there are still customs and VAT checks.

The EU has repeatedly warned that the UK cannot expect to enjoy continued “high-quality” market access if it insists on diverging from EU social and environmental standards.

UK-EU trade negotiations, led by Mr Barnier and Mr Frost, are due to begin in Brussels on 2 March.