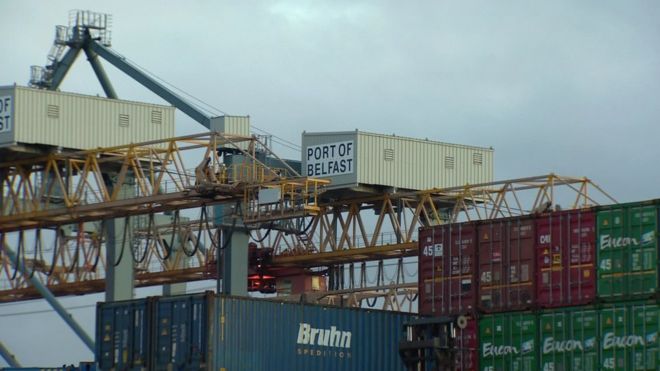 EU ministers have warned the UK that the chance of reaching a trade deal will be damaged unless preparations begin for checks on goods coming into Northern Ireland from Great Britain.

The EU has approved a blueprint for post-Brexit trade talks but Ireland’s foreign minister said a successful outcome would depend on the UK honouring its existing commitments.

“If that doesn’t happen… it will damage significantly the prospects of being able to get even a bare bones trade agreement,” Simon Coveney said.

Germany’s Europe Minister Michale Roth echoed Mr Coveney, saying: “My message is crystal clear to our friends in London – keep your promises based on the {Ireland} Protocol.”

Under the withdrawal deal, reached in October, Northern Ireland will continue to follow EU rules on agricultural and manufactured goods.

The rest of the UK will stop following these rules at the end of 2020.

The EU has been clear that will mean some new checks and processes for goods coming into Northern Ireland from other parts of the UK.

But in recent weeks the UK government has appeared to cast doubt on that with ministers saying there will be no border in the Irish Sea.

On Monday, the Northern Ireland Secretary Brandon Lewis said: “We always said there will not be a border down the Irish Sea, there’ll be unfettered access for business.

The EU’s trade negotiation document – approved by EU ministers on Tuesday – will be the basis for talks, to be led by Mr Barnier.

It said that EU standards should serve as “a reference point” in any future trade deal.

Meanwhile, UK ministers will also meet at No 10 to discuss the government’s opening stance for negotiations.

The final agreement is due to be published online and presented in Parliament on Thursday.