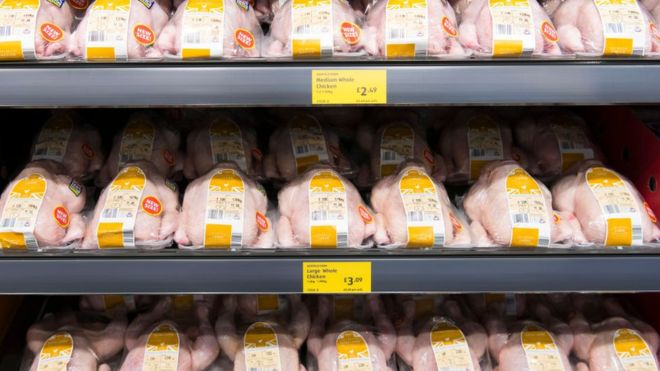 Farming leaders have said it would be “insane” to sign a trade deal that allows the import of food that would be illegal to produce in the UK, such as chlorinated chicken.

The NFU called for rules on minimum standards for imports to be made law.

Downing Street said food standards would be protected in any trade deal.

At the NFU’s annual conference on Tuesday, Ms Batters said: “This isn’t just about chlorinated chicken. This is about a wider principle.

“We must not tie the hands of British farmers to the highest rung of the standards ladder while waving through food imports which may not even reach the bottom rung.”

She said: “To sign up to a trade deal which results in opening our ports, shelves and fridges to food which would be illegal to produce here would not only be morally bankrupt, it would be the work of the insane.”

Ms Batters called for rules in the Agriculture Bill, which is currently going through Parliament, to ensure that food that would be illegal to produce here will not be imported.

In countries such as the US, chicken is sometimes washed in chlorine or other chemicals to remove harmful bacteria.

This practice was banned in the European Union in 1997 over food safety concerns.

The prime minister’s official spokesman said: “The UK has long been a world leader in food safety and animal welfare and we will continue to uphold our high food safety standards in all future trade deals.”

The EU will demand that the UK keeps its ban on chlorinated chicken as a requirement for a trade agreement with Brussels, the Guardian reported, citing documents it has seen.

The move is to protect European meat exports, but it could prove to be a potential stumbling block in any deal with the US.

Last month, US Treasury Secretary Steve Mnuchin said that the US wanted to agree a post-Brexit trade deal with the UK in 2020.

New environment secretary George Eustice drew criticism on Sunday after refusing to rule out chlorinated chicken and hormone-treated beef being imported from the US under a new deal.

But the EU believes that relying on chlorine at the end of the meat production process could be a way of compensating for poor hygiene standards – such as dirty abattoirs.

In 2020, the UK will be negotiating a trade deal with Brussels for when the Brexit transition period ends on 31 December.

According to reports in the Guardian newspaper, the EU will demand that the UK maintains a ban on chlorinated chicken as the price for a trade agreement with the bloc.

Mr Eustice’s predecessor, Theresa Villiers, had previously told the BBC that the current European Union ban on chlorine-washed chicken would be carried over into UK legislation after Brexit.