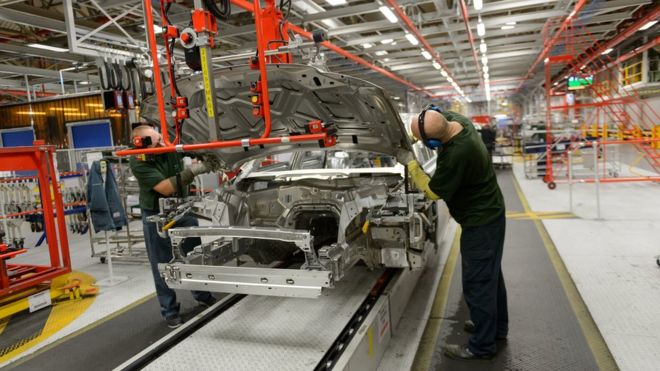 The government has estimated a post-Brexit trade deal with the United States would boost the UK economy by 0.16% over the next 15 years.

The figure is included in a 180-page document setting out the UK’s negotiating position for talks, expected to begin later this month.

The document pledges to maintain maintain food standards and stresses that the NHS is “not on the table”.

It comes as separate trade talks with the EU get under way in Brussels.

The UK government said a US deal should seek to lower import taxes, or tariffs, on many UK exports – and increase trade in services.

It says an agreement would increase the UK’s gross domestic product (GDP) by between 0.07% and 0.16%, depending on the exact terms of the deal.

The estimate is based on a model developed by the government in November 2018 when it predicted various post-Brexit scenarios.

That model estimated that UK GDP would fall by 7.6% over 15 years if the government failed to reach a trade deal with the EU.

The UK’s strategy document said a deal should also seek to boost trade in digital services, and make it easier for UK professionals to work in the US, and vice versa.

The UK will aim to lower trade barriers faced by British car manufacturers, ceramics makers and producers of products such as Cheddar cheese, the document adds.

It suggests a number of economic sectors, including energy, carmaking and construction are expected to benefit from a boost if a deal is struck.

However, it said a US deal would lead to a long-term 0.5% reduction in the output of the financial services sector, with resources “reallocated” to other areas.

The UK’s release of its wishlist for a trade deal with the US was an hour behind schedule – and a full year behind America’s list.

It’s a reminder that nothing is likely to go to plan in the year ahead.

The UK, as expected, pledges to protect consumer standards and the NHS. But America wants more access for its farmers, which would likely necessitate a relaxing of standards.

And this is happening at the same time as talks with the EU get underway (conducted, to complicate matters with a different team under the authority of a different Whitehall department) – for whom a relaxing of standards is likely to be unpalatable.

How big are the potential gains? The Department for International Trade touts the potential for UK GDP to increase by £3.4bn if tariffs are eliminated (which actually goes beyond the stated objectives) and other barriers reduced by 50%.

And that’s dwarfed by the hit to UK growth other studies have suggested will result from even a free trade agreement with the EU, compared to the status quo.

The US published its outline for trade talks with the UK last February.

The discussions will take place in both the UK and US and be overseen by the government’s chief negotiation adviser Crawford Falconer – formerly New Zealand’s chief negotiator and ambassador to the World Trade Organization.

Speaking ahead of the publication of the document, Prime Minister Boris Johnson said the UK had “the best negotiators in the business” and would “drive a hard bargain to boost British industry”.

But Liberal Democrat International Trade spokesperson Sarah Olney said the document showed the benefits from a UK-US deal “will not come close to outweighing what we expect to lose from leaving the EU”.

‘NHS not on table’

Labour MP David Lammy, who had been a prominent Remain supporter, told the government: “So now you admit the potential economic benefits of a UK-US trade deal are just +0.2% of GDP.

“In what planet does this boost wages or create jobs for anyone except the Tory Cabinet?”

In what appears to be a bid to push back against accusations made by Labour during the election that the health service would be up for sale under the Conservatives, the government also said any future deal must “protect” the NHS.

“The services the NHS provides will not be on the table. The NHS is not, and never will be, for sale to the private sector, whether overseas or domestic.”

According to recent media reports, the EU will demand that the UK maintains a ban on washing chicken in chlorine and other disinfectants as the price for a trade agreement with the bloc. But the US has expressed frustration at the ban, arguing that it is not based on scientific evidence.

Shadow international trade secretary Barry Gardiner accused the government of making “false promises” over commitments to protect the NHS and consumer standards, adding “there must be a full and proper scrutiny process for this and all trade agreements”.