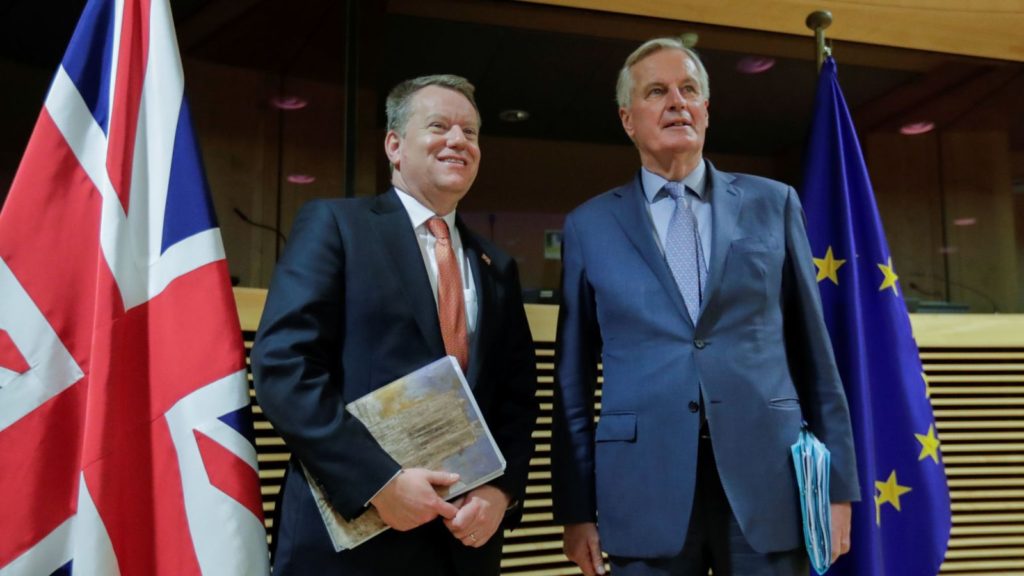 Talks between Britain and the EU on a post-Brexit trade deal have got under way in Brussels, with officials on both sides agreeing not to shake hands because of the coronavirus outbreak.

The two teams agreed to the step amid the continuing global spread of COVID-19, the disease caused by the coronavirus.

Hand sanitisers and NHS advice have also been placed throughout the UK’s mission in the Belgian capital.

The number of cases in the UK has risen to 39, while the EU has raised its risk level.

The first set of negotiations – at the European Commission’s Berlaymont headquarters – comes just over a month after Britain left the EU at the end of January.

Prime Minister Boris Johnson’s chief Europe negotiator David Frost was joined by the UK’s ambassador to the EU Sir Tim Barrow and a group of aides.

Mr Frost chatted and posed for photos with EU negotiator Michel Barnier ahead of the talks.

Mr Barnier said: “We approach these negotiations in a constructive spirit. We want to agree an ambitious and fair partnership.

“We will respect our prior joint commitments.”

Mr Frost said he was “delighted to start talks on a constructive basis today” with his EU counterpart.

The discussions are expected to continue until Thursday, with further rounds of talks set to take place in London later this month.

Both sides have already set out their red lines in the negotiations.

There are major differences on issues such as fishing rights, the EU’s demand for a “level playing field” to ensure fair competition, and the role of the European Court of Justice.

The deadline for a deal is currently the end of the Brexit transition period on 31 December.

Mr Johnson has ruled out extending the talks beyond the end of this year, with the PM saying he is prepared to walk away without a deal if it comes to it.

A meeting to take stock is scheduled for June, by which point it should be clear if Mr Johnson’s preferred Canada-style deal is possible.

It is the UK’s position that the “broad outline” of any deal should be apparent by then, which could then be finalised by September.

If not, its negotiating mandate says “the government will need to decide whether the UK’s attention should move away from negotiations and focus solely on continuing domestic preparations to exit the transition period in an orderly fashion”.