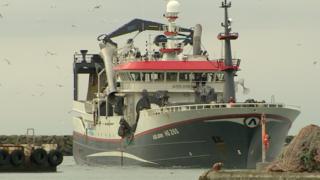 With an icy wind blowing behind it the fishing trawler Asbjoern 265 enters port in Skagen on the very northern tip of Denmark. It’s Denmark’s busiest fishing harbour.

A flock of seagulls wheels overhead, raucous and hungry. Snowflakes drift in the air. Out to sea a line of white waves mark the turbulent waters where the currents of the North Sea and the Baltic collide.

The Asbjoern is an impressive sight. It is 75m (246ft) long, freshly painted, with a hold crammed with fish. This catch alone, of blue whiting, is worth more than £1m ($1.3m).

The boat is Danish. These fish have been caught to the west of Ireland. But most of what the Asbjoern lands comes from UK seas.

“Sixty percent of our catches come from UK waters, so Brexit is a big issue for us,” says Fridi Magnussen, owner of the Asbjoern.

“The saying is they will ‘take back control’,” he says, “and we don’t know what that means.

“We go back to what? Through history we have been able to fish in the North Sea and the UK waters, for all time.”

After Brexit the UK is taking control of its exclusive economic zone, stretching up to 200 nautical miles offshore.

This concept of a country’s waters was adopted in the 1980s. But fishing patterns that predate that, from the 1970s, were used to decide the division of fishing quotas between EU countries, the UK, Norway, the Faroe Islands and Iceland.

“I can’t really accept the argument of handing anything back to the UK, as Danish fishermen have been operating in those waters for centuries,” says Esben Sverdrup-Jensen of the Danish Pelagic Producer’s Organisation.

His members run the big trawlers, like the Asbjoern, that fish open waters for species like herring, mackerel, sprats and sand eel. Much of it is not for human consumption but turned into fish meal for chicken, pig or salmon farming.

“Handing back anything is not really any sort of an argument. No, I can’t see the Danish government signing up to anything that would be in conflict with the mandate agreed upon in the EU,” he says.

The EU’s mandate, its position in the negotiations, is that both current access to UK waters and the current share held by each country must stay the same. And the EU says keeping continuity in fishing is a precondition for granting the UK a trade deal.

But the UK says it alone will decide what happens in UK waters and, because it has many of the rich fishing grounds, UK boats are entitled to a greater share of all the fish caught.

On the bridge of his trawler the Ceton’s skipper, Johannes Claesson, is surrounded by giant TV screens. They show detailed, digital maps he has made of the fishing grounds.

All boats, including UK ones, cross back and forth, chasing not just the fish but the best markets for them, he says.

“When UK vessels are fishing their quota in UK zone or European zone, they also cross the border, because maybe they can sell their catches of fish for a higher price in Norway, the Faroe Islands or Denmark. So they are crossing the border same as we do.”

A study by the University of the Highlands and Islands in Scotland estimates that UK boats land around 40% of the fish caught in UK waters by weight, but more than 50% of the catch measured by value.

In a building on Skagen’s quayside a conveyor belt carries a constant flow of glistening fresh herring. Machines take in the fish and, within seconds, clean fillets appear. The factory produces 800 million herring fillets a year.

CEO Johannes Palsson says if the UK insists its boats catch more of the herring in UK waters Britain’s problem will be finding markets for that fish.

“The biggest volumes of herrings for instance are consumed in the EU. Not that much in the UK,” he says.

It might be hard for the UK to sell, because the EU could impose tariffs, taxing any imports. And he adds with a smile: “Or English people have to learn to eat herring – a lot of it.”

But British consumers generally don’t like herring, or the other main species caught in UK waters. The UK exports up to 80% of the fish it catches. So businesses like salmon farmers, and crab and shellfish suppliers, who rely on exporting to the EU, could be vulnerable if there’s no fishing deal and the EU imposes tariffs.

In the fishmonger’s next to the herring factory they have displays of fresh seafood on ice: lumpfish, turbot, prawns, skate and many more. Jan Nielson, who runs the shop, says even the fishermen on UK trawlers that call into Skagen don’t like to eat what they catch.

“We supply the big trawlers with fish, because they don’t eat herring or hake or whatever they bring in. So they give us a call and say can you deliver to us haddock or cod.”

Above the door of Skagen’s town hall there’s a huge carving of a fish. Mayor Birgit Hansen’s own family history shows the ties that have bound fishing communities on both sides of the North Sea.

“My uncle he was a big fisherman in Grimsby. He went from Denmark and he had two boats, and he lived in Grimsby for many years,” she says. He did so well in the UK he would visit Denmark in his own plane.

“Brexit will change the world,” she adds. “But I think still we are dependent on each other. And we have to make some agreements that respect your decision in some way. But also make sure that the English, British fishermen can sell their fish.”

Fishing represents just a tiny part of what’s at stake in the coming Brexit negotiations but it is a uniquely emotive issue and both sides have warned that failure to find agreement on fish could scupper an overall deal.