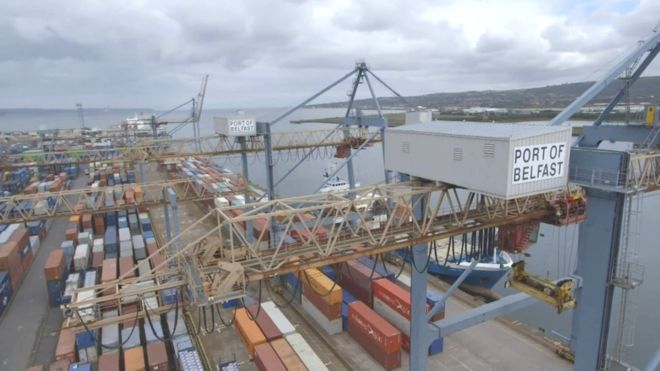 An inquiry examining the impact of new customs arrangements on trade between Great Britain and Northern Ireland has been set up by a Westminster committee.

The Brexit deal has major implications for Northern Ireland.

Northern Ireland will still be part of the UK’s customs territory at the end of the transition period but will also continue to follow EU customs rules.

That is likely to mean new bureaucracy for trade between Northern Ireland and the rest of the UK.

The government has promised to ensure “unfettered access” for Northern Ireland businesses to the rest of the UK but has not set out how it will do this.

It is seeking written evidence that can be submitted until 1 April, on a range of questions including:

Chair of the Northern Ireland Affairs Committee Simon Hoare said there is an “urgent need” for clarity on customs arrangements under the protocol.

“Despite government promises of unfettered access, it now seems likely that additional paperwork will be required to move goods from Great Britain to Northern Ireland.

“Meanwhile, businesses remain in the dark about how they can get their goods to market after the transition period,” he added.