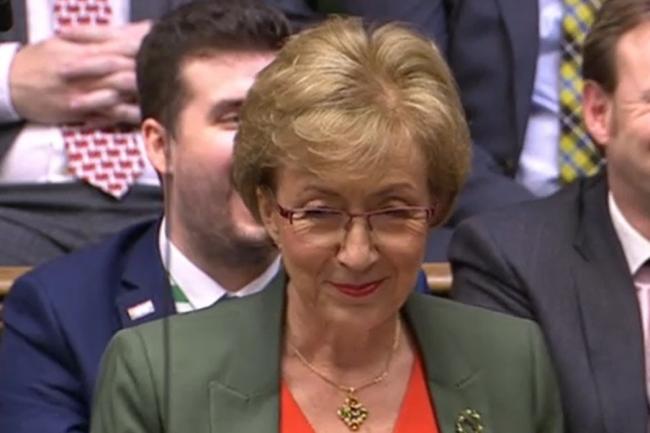 The government’s previous preparations for a potential no-deal Brexit stand it in “incredibly good stead” to help firms deal with the impacts of the coronavirus outbreak, the former business secretary has told Sky News.

Andrea Leadsom told Sky’s political editor Beth Rigby that there was a “huge amount” that ministers could do to “ensure that businesses are protected”.

Ms Leadsom continued: “Ironically, I think a lot of the work we did last year preparing for the supposed no-deal Brexit on 31 October has stood the government in incredibly good stead – looking at packages of support and how you might be able to help companies keep going should something dramatic happen.

“I’m quite sure that some of that will be being dusted off with a view to looking at how that could be adapted.”

Ms Leadsom, who lost her job in Prime Minister Boris Johnson’s cabinet reshuffle last month, also said that sick pay should be given to gig economy workers amid the outbreak of COVID-19, the disease caused by the coronavirus.

She said she was sure the measure would be something the government will be considering as the number of cases of coronavirus continues to rise.

Ms Leadsom said: “I’m sure the government will be looking closely at what further support can be given and whether it is in the form of statutory sick pay which normally isn’t available to non-standard employee arrangements.

“I’m sure, as I say, there will be measures put in place to try and lend support.”

Prime Minister Boris Johnson earlier announced that workers who need to self-isolate because of coronavirus will be eligible for sick pay from the first day they are off.

The prime minister told MPs that the rules would be changed as part of forthcoming emergency legislation to tackle the outbreak.

At the moment, sick pay is paid from the fourth day someone is absent from work due to illness.

Mr Johnson said those who self-isolate are “helping to protect all of us by slowing the spread of the virus”.

“If they stay at home and if we ask people to self-isolate, they may lose out financially,” he told the House of Commons.

“So, I can today announce that the health secretary will bring forward, as part of our emergency coronavirus legislation, measures to allow the payment of statutory sick pay from the very first day you are sick instead of four days under the current rules, and I think that’s the right way forward.

“Nobody should be penalised for doing the right thing.”

Many unions and business groups have welcomed the move, but have called for the government to also help self-employed workers and those who earn less than £118-a-week, both of whom do not get sick pay.

Ms Leadsom sat down with Sky News for a wide-ranging interview, her first since she was sacked by the PM.

She described the day of her dismissal as “not much fun” and admitted that it came as a “personal blow”.

Ms Leadsom said she does not know why she was asked to step aside from her role, but added: “For me, I always try and focus on the fact that it’s been an amazing six years in government and it’s the greatest privilege to do that.