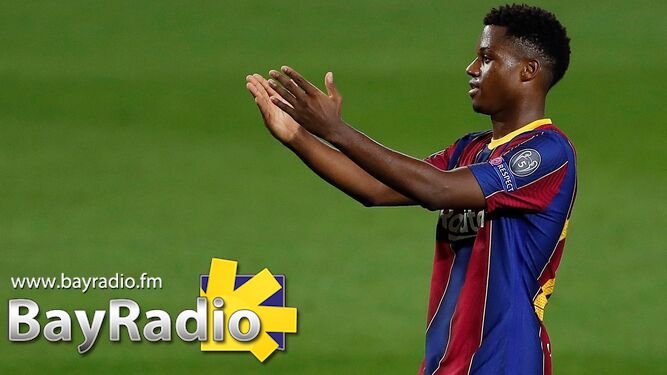 Barcelona soundly beat Ferencvaros 5-1 in the first leg of the UEFA Champions League. It should have been a day of celebration for young star Ansu Fati, who scored the 2nd goal.

But the match will be remembered for a journalist calling the Spanish citizen an illegal ‘black street vendor’.

“Ansu running has something of a gazelle, a very young and black mantero [street vendor] that you suddenly see running along Paseo de Gracia when someone shouts ‘Water, water!’ – announcing the arrival of the Guardia Urbana. Jungle prints in the heart from the city. Now, this does not happen much anymore, because for Ada Colau [Barcelona mayor] the criminals are the police and not the manteros, who no longer have to run away.”

The comment went unnoticed until Antoine Griezmann attacked the write-up, saying Ansu was an ‘exceptional’ player deserving of respect and not ‘racism’.

Although the young Spanish national – born in Guinea-Bissau – is still a minor, Barcelona threatened to sue ABC in his name for discrimination.

Yesterday, Sostres penned an apology for his column.

He defended his words were intended to ‘praise’ the ‘beautiful’ movements of Ansu on the pitch.

“It was not my intention, nor my opinion, to be racist – I’ve already expressed my favour for the player in every column since be began playing.

“I lament deeply the misunderstanding and apologise to anyone who was offended.”

Ansu Fati was born in Guinea-Bissau in 2002, but moved age 6 to Spain when his elder brother signed for Sevilla. He has been at Barcelona’s youth wing since 2002, and made his debut last year.

He became the youngest player to score in the Champions League in December last year, just 17 years and 40 days old.