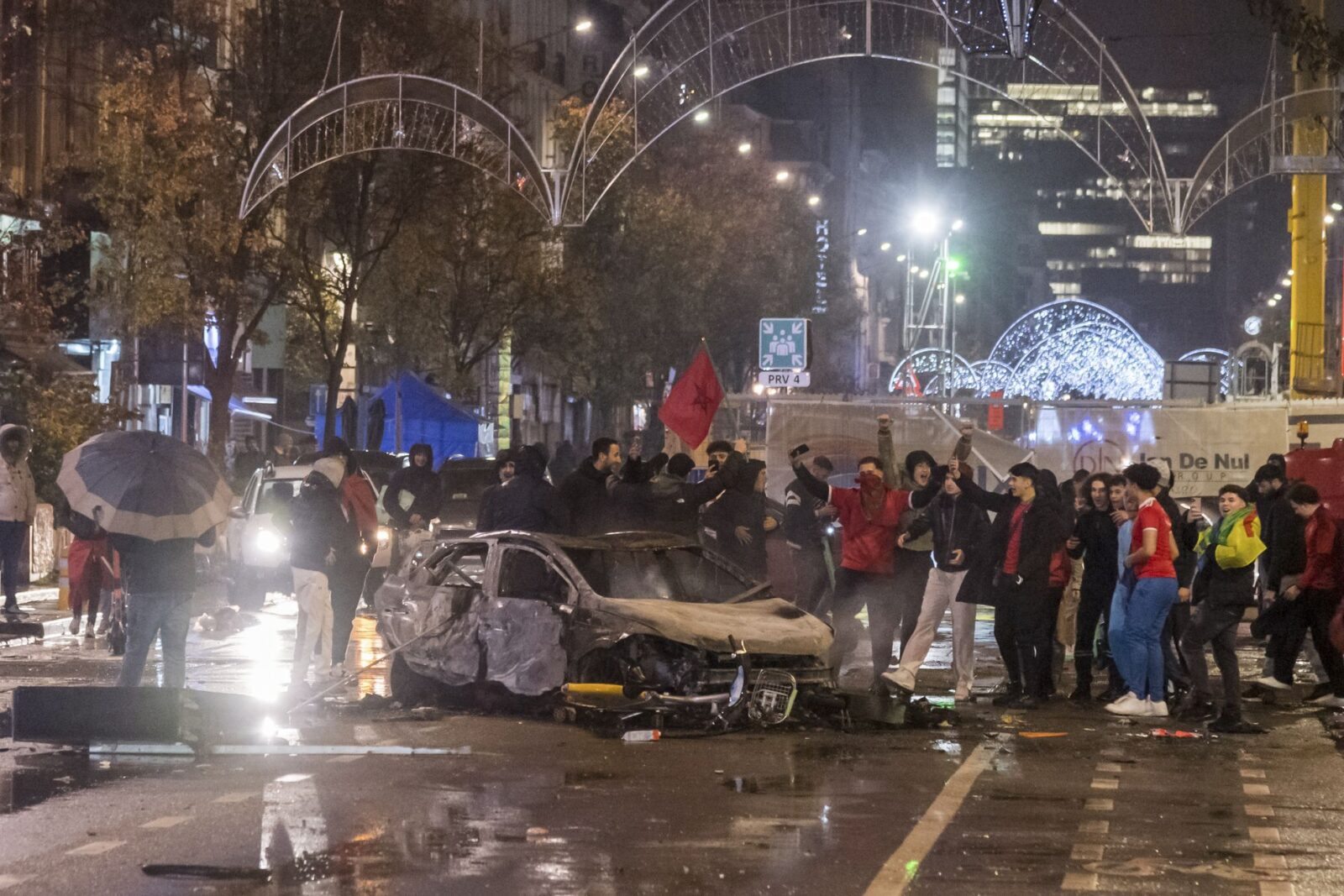 Just after the match ended between Morocco and Belgium played this Sunday in the World Cup in Qatar, riots began in the center of Brussels, as well as in the Dutch cities of Amsterdam and Rotterdam. Not even an hour had passed since the victory of the Maghreb team 2-0 when groups of young people with Moroccan flags overturned at least one car, burned street furniture and rental scooters. Two hours later, the Belgian authorities announced the arrest of a dozen individuals, according to the local press.

In Rotterdam, a group of 500 young people, fans of the Moroccan team, threw glass and fireworks at the police. In Amsterdam, several buses and trams had to modify their route in the eastern district, after fires were lit in the driveway. There were also firecrackers, and at least one car was set on fire. In Hague, other supporters broke into vehicles that were parked in the street and proceeded to steal all possessions inside. As the situation escalated, agents intervened to separate people, who were beating each other up. In the Netherlands, there is a community of Moroccan origin which has 420,000 citizens, 60% of whom were born in the Netherlands.

In the Belgian capital, the merchants of the center had been warning since the previous day in the local press that this could happen: “Whatever the result, we expect riots”. And, in fact, before the end of the game, the police had already deployed units of riot agents, a surveillance helicopter and the usual water tankers that can be seen in the Belgian capital. However, the deployment did not prevent the riots from starting after the match.

At the end of the match fireworks were heard and many young people with Moroccan flags were seen in the streets. Riots broke out on Lemonnier Boulevard. In the images posted on social networks you can see the street furniture and scooters burning and even a car overturned. The riots approached the Christmas market area and the Grande Place. However, in that area the police protected the entrances to prevent the disturbances from reaching them.

“The police have already intervened firmly. Therefore, I advise the followers not to come to the city center. The police are doing all they can to maintain public order,” said Brussels Commune Mayor Philippe Close. The clashes caused a great traffic jam both in the city center and in the adjacent neighborhoods.

In other communes of the capital there was also tension at the end of the game, although not of the intensity of the center. In Molenbeek, where there is a large Moroccan community, which in some areas reaches 80% of the population, there was a violent shock hoax minutes after the final beep, when a group of young people approached the police station of the commune and broke a glass window. When the so-called “peace guards” arrived, also of Moroccan nationality or descent, the situation calmed down.

The situation got worse in the evening. The festive atmosphere that was felt a few hours before disappeared. After one o’clock in the afternoon, in this commune of 97,500 inhabitants, almost half of whom were born outside Belgium, many Moroccan flags were seen. It was a special day for a neighborhood living with the stigma of jihadism since November 2015. Such a day could only be compared to the event that happened in 2008, when the a match between Morocco and Belgium was played. A friendly game that ended four to one, with Morocco taking the victory.